Images of Religious Freedom Inspire and Call us to Action 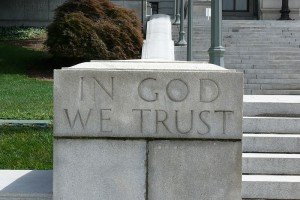 Bishop Ronald Gainer of the Diocese of Harrisburg recently reminded Pennsylvania’s lawmakers to look around the magnificent “office” they walk into every session day. During his keynote speech at the 2015 legislative breakfast, hosted by the Pennsylvania Catholic Conference and the Pennsylvania Council of the Knights of Columbus, Bishop Gainer urged the crowd not to overlook the art and architecture of the Pennsylvania State Capitol and the significant and meaningful messages portrayed.

Walking up the steps of the building … an inscription in the stone reminds us that “In God we trust.” That is the perfect prayer to start the day.

In the main rotunda, you’ll see a mural painted by Edwin Austin Abbey entitled “The Spirit of Religious Liberty” showing William Penn’s ships coming to the New World. On those vessels were believers who fled their homeland seeking the freedom to practice their faith both publicly and privately without government interference.

Another of these murals, “Spirit of Light,” shows women carrying flames against the backdrop of oil derricks. It is said the light of Pennsylvania depicted in these murals is not only the literal light produced by oil, but also the light that our foundational principle of religious freedom offers to the world.
…

Pope Francis’s visit was also full of images that will stay with us for a lifetime, like the photograph of Pope Francis embracing inmates at Curran-Fromhold Correctional Facility, Pope Francis praying at Ground Zero among leaders of all different faiths, and hundreds of thousands gathered on the Ben Franklin Parkway for Mass. Through these photos, Pope Francis showed us the Gospel in action, how to care for the needy and how to work together for the common good. This extraordinary man with hundreds of thousands of people waiting for him directed his driver to stop the car so that he could greet and bless a young boy in a wheelchair. That moving image of the Pontiff embracing the young man gives us a compelling image of a spiritual ideal: love. And it makes me ask, when was the last time I showed that kind of love and compassion to a stranger?

At first viewing, these images stir emotions in our heart and even inspire us to action. But over time, we may no longer be stirred to action by their inherent message. Art and imagery, which we overlook in our hurry from one meeting to another, can communicate the founding principles of our Commonwealth and our society. These images, this priceless art, make the invisible or imperceptible become reality before our eyes.

And what is the picture of the Church in our Commonwealth? There are over 3 million Catholics in Pennsylvania publicly living out our faith in a variety of ways. Catholic health care facilities serve over 3 million people of all faiths every year. Our Catholic charities agencies offer services to hundreds of thousands of Pennsylvanians of all faiths or no faith each year, through food banks, emergency shelters, transitional housing and clothing drives. Our Catholic charitable outreach also helps immigrants and refugees, and our counseling services assist families, those struggling with addiction and those with mental health issues. Over 1,000 parishes across the state serve the local communities and provide a spiritual home for young and old alike. Our over 500 Catholic schools allow more than 140,000 students, both Catholic and non-Catholic, to grow in wisdom and grace each year. These ministries answer Jesus’ call to feed the hungry, welcome the stranger, clothe the naked, care for the sick and visit the imprisoned.

The religious freedom depicted in the art around the Capitol allows these Catholics to be active in their communities, living out their faith every day and providing a benefit to all Pennsylvanians, not only those who consider themselves religious.

Christians in Pennsylvania are answering the mandate of the Gospel when they live out their faith in the public square, when they take their faith beyond the walls of the church and into the community.
…

In Washington, D.C., Pope Francis said, “…(Religious) freedom remains one of America’s most precious possessions. And, as my brothers, the United States Bishops, have reminded us, all are called to be vigilant, precisely as good citizens, to preserve and defend that freedom from everything that would threaten or compromise it.”

William Penn would agree with Pope Francis’s comments. As some work to remove God and faith from the public square, they would remove the very inspiration and foundation of our state and our culture. Our Commonwealth’s founding on the principle of religious liberty is well known, and the art that you walk by every day in the capitol reinforces that standard. The photographs from the Papal Visit showed the varied and important ways faith influences society.

I ask you, in your role as leaders of men and women, and shapers of society, to work to strengthen our foundation of religious freedom. I ask you to pass laws that allow for people of faith to answer the call of the Holy Father to be agents of change in society. Let us all rise to the ideal set by these images, which herald the important role of religion in the public square.

Read the entire text of the speech here.