The “Buyer Beware Act” is off to a promising start in the State House and Senate. The bill increases penalties on criminals convicted of certain human trafficking offenses.

It was introduced by two York County Republican legislators: Rep. Seth Grove and Sen. Kristin Phillips-Hill as House Bill 12 and Senate Bill 60. The measure was introduced in a press conference on January 9th and has at least a dozen co-sponsors in the Senate and more than 60 in the House.

In addition, those convicted of patronizing a victim of sexual trafficking would receive an increased fine of between $1,000 and $30,000, up from $500, at the discretion of the court. If the victim is a minor at the time of the offense, the fine would be increased to a minimum of $5,000 and a maximum of $100,000.

“There’s been a lot of good work done to fight human trafficking here in Pennsylvania,” said Rep. Grove. “I know the Trump Administration has been pushing it at the federal level. It’s good that it’s finally getting the attention it deserves.”

“I think a lot of people are shocked and have a hard time believing that, in this modern era, that slavery still exists,” she said. “The average victim is between the ages of 12 and 14! They are led into a very horrific life that includes torture, mutilation, isolation, and threats of violence against family and loved ones.”

“As it stands now, without this bill, if you advertise a victim to be trafficked, the penalties are not that severe,” said Sen. Phillips-Hill. “If you have sex with a minor, that law didn’t come after you. But with the Buyer Beware Act, it will address these issues.”

Grove and Phillips-Hill both thanked the PA Catholic Conference for its support. They also praised the work of the York County District Attorney’s Office.

The legislative session is still in its early stages, but Rep. Grove has already given a lot of credit to new Majority Leader Bryan Cutler. 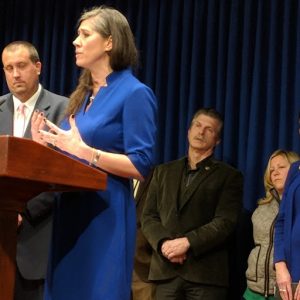