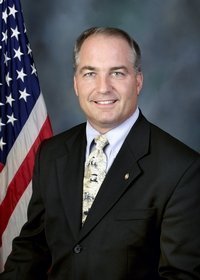 Rep. Kerry Benninghoff (R-Centre, Mifflin) is the Majority Whip in the PA House of Representatives. That is a figurative rather than literal title.

“Essentially your job is to make sure you have enough votes to get a bill passed or to stop a bill,” Benninghoff told me during a visit to his Capitol office. “We are whipping the votes. It’s actually an old term, an old English term. When they would do fox hunts and they were ending the hunt, and rounding up the dogs on the way in, they would yell, okay boys, whip ‘em in—whip the dog in to try to get the fox at the end of the race. Parliament picked this terminology up. It’s kind of rustling the members together, to kind of whip them in line to get the votes.”

Clearly, he has been asked this question before. We talked for several minutes and discussed a number of aspects of the political process. He says his job is really about relationships and being able to communicate to members the necessity of trying to get support for bills.

“For the most part we know where we’re at,” he said. “But sometimes you get to the floor and people have a change of heart or they’ve acquired other information. The goal is to try to get good legislation passed and we like to know that we have the votes to get it done.”

Benninghoff says he has assistants assigned to each region and they will lobby 10 members or so on the votes. He says the staff devised an electronic way to monitor those votes instead of writing them down on paper.

“The legislative process is fun. It’s a little hard for some people to understand. People will say sometimes ‘why don’t you guys just hold hands and get along?’ Our process was designed to be deliberative. Our discussions and our debates, people should not assume, is all egregious and mean and ugly.”

He uses the analogy of a soldier’s dress sword. It does not start out that way. It begins as a piece of raw iron.

“We heat it. We pound it. We shape it. We sharpen it. And at the end of the day, you have this beautiful piece of weaponry. But it didn’t start out that way. The legislative process is very similar.”

Benninghoff worked as the Centre County Coroner until getting elected to his current seat in January of 1997. That’s 22-1/2 years in elected office. He has learned a few things along the way and likes to share some knowledge with the newcomers.

“The first thing I tell members is that ‘you have a responsibility to listen to other members, even those of the opposite party. You may not agree with them. And even after they say something or debate or discuss something in committee, you may still not agree with them, and it may not change your vote, but you have an inherent responsibility to listen because you will learn something.’”

Benninghoff says that is the beauty of being where he is. People come from different walks of life and have different beliefs. He believes that differing opinions make the product better.

“I had a bill that I had to introduce four different sessions until I could get a final product that we could get commonality on and be comfortable with and passed into law. It was a bill that affected 4,200 Pennsylvanians.”