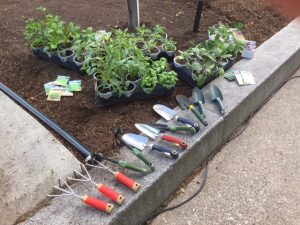 Some of Pennsylvania’s politicians play dirty at the State Capitol – literally. Several members of the Legislative Hunger Caucus led by Senate President Pro Tempore Joe Scarnati (R-Jefferson) and Representative Jake Wheatley (D-Allegheny) got into the dirt and planted tomatoes, peppers, and other fresh vegetables in the Hunger Garden on Wednesday, May 10, 2017.

Located on the State Capitol grounds between the Main Capitol Building and the Ryan Office Building, the Capitol Hunger Garden provides healthy food for the Downtown Daily Bread soup kitchen in Harrisburg and serves as a valuable tool to raise awareness of hunger issues in Pennsylvania.

Every year, hundreds of volunteers including Master Gardeners plant, cultivate, and harvest thousands of pounds of produce to feed many Pennsylvanians in need from this small plot of earth.

The Pennsylvania Catholic Conference’s Social Concerns Director Eric Failing offered an appropriate quote from Pope Francis, “It is Jesus himself who invites us to make room in our hearts for the urgency to ‘feed the hungry,’ and the Church has made it one of the corporal works of mercy. To share what we have with those who lack the means to satisfy such a primary need, educates us in that charity that is an overflowing gift of passion for the life of the poor that the Lord makes us meet.”

Hunger is an issue that affects every community in America; men, women, the elderly, and especially children face food insecurity every day. Catholic Charities operate over 10.4 million food services across the country including food distribution in pantries and food banks, fully prepared meals served in dining facilities, soup kitchen facilities, and home delivery.