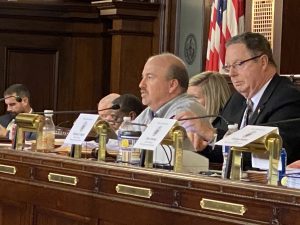 The budget hearings at the Capitol in Harrisburg have wrapped up and it will soon be time for discussion and debate. At the crux of the debate will be the age-old difference in philosophy between Republicans and Democrats: Republicans say the Governor is overspending. Democrats generally feel the legislature is underfunding.

“We learned that we really have to unpack this budget because there are a lot of moving pieces and gimmicks that were kind of plastered together to put this budget together,” said Rep. Seth Grove (R-York).  “Everything from unreal revenue sources to moving overspending to last year and the next fiscal year. Just in DHS (Department of Human Services) alone, they’re showing $453-million of overspending, but there’s an additional $300-million they’re applying to next year’s budget as well.”

“Year after year we see less and less detail in the Governor’s budget policies,” said Rep. Stan Saylor (R-York), Majority Chair of the House Appropriations Committee, in his closing statement after one of the days of hearings. “The lack of details often so stunning that we were left questioning whether these proposals were really real, or really a priority of this administration…One of the biggest concerns continues to be supplementals and the overspending of this administration.”

Several Republican representatives talked about the extensive requests by the Governor for those supplementals, which refers to funding needed beyond what has been budgeted. But Rep. Saylor saved his sharpest criticisms for DHS.

“Yesterday the Department of Human Services sounded the alarm of an agency that has run amok. And I mean run amok,” Saylor said at the close of the final day of hearings. “The department has admitted that the overrun cost for the current fiscal year, I think, is over $800-million—not the $500-million that was reported in the Governor’s budget document. DHS has achieved this failure by pushing this year’s costs into next year’s budget…the kinds of gimmicks that we see all the time in these budgets that really continue to create real financial issues for the state of Pennsylvania.

“We understand at times that things happen in a fiscal year. Record numbers of supplemental spending, though, just needs more and more definition to the logic.”

Minority Chair Matt Bradford (D-Montgomery) conceded that there have been creative budget tactics used by the Governor’s office, but he says they have been given no choice.

“This has been going on forever,” Bradford said in his closing statement. “So it is in disingenuous to try to blame career officials and say ‘oh my gosh, you overspent.’ Come on! We underfund these lines habitually. And it is obvious.”

Bradford went down the same avenue the day before when DHS had finished its presentation.

“They say it’s overspending, with a connotation of mismanagement,” said Bradford, referring to complaints by Republicans on the Appropriations Committee. “What I believe is going on is the intentional underfunding of mandated spending for political purposes.”