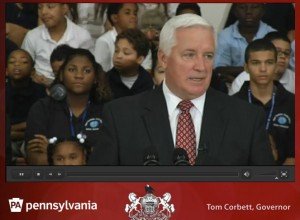 Governor Corbett, a former teacher, said the focus in education reform needs to be “child, parent, teacher…and just in that order.” He was accompanied by several state senators and representatives as well as Secretary of Education Ron Tomalis. Click here to send a message to your legislators in support of school choice.

“I believe you need to crawl before you can walk, walk before you run,” said Corbett, who believes this education reform proposal provides “common ground” from which Pennsylvanians can improve.

In a statement released on September 28, the Catholic bishops of Pennsylvania said that school choice “could herald a new, more just era for education in Pennsylvania – an era in which we focus on the ideal educational environment for each student, not on a mandatory system in which students are assigned to a school based solely on geographic location. The current treatment of these children, particularly children from low-income families, is unjust and inequitable. Families are often prevented from accessing the educational options that would be best for them because of economic or social barriers.”

In addition to Governor Corbett, House Majority Leader Michael Turzai and Senate Majority Whip Pat Browne also spoke at the press conference. Representative Turzai (R-Allegheny) said that the reforms discussed today are a start, “we have to have the reforms, particularly in failing school districts, that can make a difference so that we can expand the programs.”

Senator  Browne (R-Allentown, Lehigh, Northampton) said that education reform is “about one thing, it is about providing opportunities for our children…we need to try different approaches and let those approaches compete.”

The specifics of the increase to the EITC program, which is currently funded at $75 million, have yet to be announced. An increase to the EITC will provide more low and middle income families with the tuition assistance they need to create options in education.  The suggested pilot program for vouchers includes full opportunity scholarships to students in the bottom five percent of failing elementary and high schools whose family income is at 130% or less of the federal poverty rate. That translates to a family of four earning $29,000 each year. Further, students whose families earn 185% of the federal poverty level, or $41,000 each year, get 75% of the opportunity scholarships.

Corbett’s plan also includes a reform of Pennsylvania’s charter school law and teacher evaluations.  A vehicle for the education reform proposal has not been determined; visit pacatholic.org for updates.

Click here to send a message to your legislators in support of school choice.