Girl on a Train

by Blue
crisis pregnancy, pro-life, prolife, USCCB
Comments are off 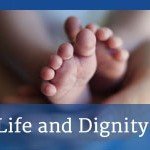 A few days ago, I was in a crowded metro car during early morning rush hour. At one stop a rather ordinary, but nervous young woman boarded. As the train started moving again, she braced herself and then spoke aloud to everyone.

She tried to project her voice, with a controlled self-consciousness as she did so. She explained, haltingly, that she had recently become homeless, had nowhere to go, and would be grateful for any money or help offered. She hesitated, and then added that she had just learned she was pregnant. When finished, she looked down at the floor, eyes clouded with uncertainty.

I’ve been riding the metro for several years. This was the first time I have seen a young woman explaining that she was both homeless and pregnant, her words faltering as she looked around at the many faces ignoring her. Her entire appearance expressed, in a striking way, someone who was both trying to contain her fear yet summon the courage to express her urgent need.

A few people came forward, holding out $20 bills, which she accepted with trembling hands. I felt compelled to do more, to give her something beyond the expectation that she would have to live in the streets and the subway, day by day, begging for money. I grabbed some paper and jotted down information about a local maternity home.

I offered her the piece of paper. She was startled, then took the paper and read. She looked back at me, curious. I gently explained how it was a place that could help her out. I saw a sense of longing well up in her, and something else: a flicker of hope in her eyes. I smiled at her and nodded reassuringly. She smiled in return, and thanked me quietly.

That brief encounter was very powerful. It was a small connection, with few words exchanged; but I’ll never forget the look of hope in the girl’s eyes. I pray that she was able to reach the maternity home so she will not have to spend nights on the streets, alone and vulnerable.

As it gets colder and we approach the holidays, let us especially keep in mind all who are homeless and all women facing unexpected pregnancies, especially young unmarried pregnant women who feel they have nowhere to go, no one to trust. If you know of any women in these circumstances, there are pregnancy help centers and maternity homes that can offer resources and support. Some homes have special programs to help mothers finish their education and get a job. Check with your parish or diocesan pro-life office about local resources.

The more we educate ourselves about what help is available to women in crisis pregnancies, the more we can be a light to others in dark situations. Even for the stranger we encounter, it is always possible to offer a bit of hope, no matter how small.