Getting an Update from the Notre Dame H.S. of Easton Principal Andrew D’Angelo 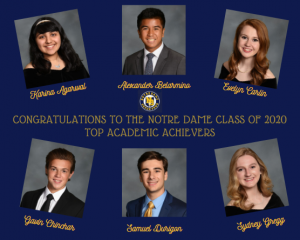 School administrators may be used to making changes here and there, but this was a pretty dramatic change. It was in mid-March that Governor Wolf was shutting down all schools in Pennsylvania.

No one knew for how long at the time, but schools like Notre Dame High School of Easton were not waiting around to find out.

“We made a very quick pivot from traditional in-school education to using a virtual platform,” said Andrew D’Angelo, the Principal of Notre Dame. “It came together quickly and was executed pretty quickly. We were very pleased with what we put out there for our kids and our families.”

The schools had actually gotten a boost from the state and lawmakers, when Sen. Kristin Phillips-Hill’s (R-York) bill passed this past summer that allowed for the use of flexible instructional days.

“We had already created the framework of a plan for doing on-line education in the event that we had a lot of snow days,” D’Angelo said. “Once we moved to the on-line platform we were just able to enhance what we created for those flexible instructional days.”

D’Angelo acknowledges that seniors are still having a tough time dealing with the shutdown since they are not able to experience the traditional rite-of-passage activities. The spring athletes have also been greatly affected, having their entire season wiped out.

Plans for graduation, meanwhile, are still up in the air.

“We’re trying to be very kind of cautious before we make any definitive decisions. There are lots of ideas being thrown around, obviously a virtual graduation, a drive-in graduation. I did send out a note to our seniors saying I was committed to doing everything I could to get them an actual live graduation. It won’t be in June as we had originally scheduled, but maybe over the summer or even the possibility of doing it in December when all the kids are home from college.”

D’Angelo stressed that he has been incredibly impressed with the parents, the faculty, the kids and how they have all come together and been extremely supportive of one another.