You will never guess where you can find a wide selection of biblical quotations when you visit Harrisburg. Well, yeah, the bible. But I’m talking a building.

It’s the State Capitol of all places–hard to believe in this day and age where there is always someone looking to be offended.

PA Rep. Kathy Rapp, a Republican out of the northwestern part of the state, put out a nice booklet that is complete with the verses and the scenes that accompany those verses. Many are in the Governor’s reception room, House chambers and Senate chambers.

Rapp stated in the first page of her book “Pennsylvania’s history and heritage is rooted in religious significance. From William Penn’s own vision and statement of establishing a Holy Experiment, to the first laws proposed by the General Assembly, to the first section of the first Constitution, the Charter of Privileges, entitled the freedom of conscience, our founders based their way of life on religious convictions.

There are verses from the Old Testament, including Isaiah 42:1,4,7,10 “Behold my servant whom I uphold to pen the blind eyes, to bring out the prisoners from the prison, and them that sit in darkness out of the prison house. Sing unto the Lord a new song ye that go down to the sea.”

There are also several from the New Testament and the Gospels, like Matthew 5:10 “Blessed are they which are persecuted for righteousness sake.”

No, this would not happen today. Not with the hyper-politically correct world we live in. In fact, it’s kind of surprising no one has fought to take it down. Maybe they have and I don’t know it.

There’s a case involving Lehigh County and the cross on its county seal that was added in 1944. It was fine then, but of course it had to offend somebody eventually. Yep. It did. The Wisconsin-based Freedom From Religion Foundation—how they came across the symbol is beyond me—joined four Lehigh County residents and filed a lawsuit. According to the Morning Call, they argued “the seal was a violation of their first amendment rights.”

U.S. District Judge Edward G. Smith agreed with the folks who were offended. He ruled in September that Lehigh Co. would have to change it on flags, cars or other property but could keep it on older documents. The County appealed to the Third Circuit U.S. Court of Appeals, which is waiting for the U.S. Supreme Court to act on a similar case before it makes a 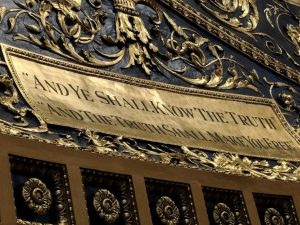