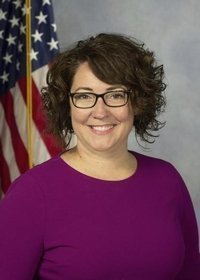 Rep. Danielle Friel Otten (D-Chester) was one of a number of women that were elected into the Pennsylvania legislature in the 2018 November election.

Otten feels that bringing more women into positions of leadership brings more collaboration, new ways of connecting with each other, and different ways of thinking about issues.

“We know that in the corporate world, that when there are 30% of the people at the table are women, groups become more collaborative,” she continued. “Government is so tense these days, and I really believe that women are going to be a big part of how we bring people back together.”

Otten is a product of a Catholic school education, including spending three years at Cardinal Dougherty High School, which closed in 2010.

Otten says she hadn’t really considered running for office outside of possibly school board when her kids were older. But when she first became a mom a couple of years ago she found out about the Mariner East Pipeline Project which was going to go through her neighbor’s yard. That was only 50 feet from her back yard.

“It carries highly volatile natural gas liquids,” she said, “Ethane, propane and butane, which are highly explosive and incredibly dangerous. That easement is being expanded to ship industrial quantities of these liquids through residential neighborhoods, past schools, in front of nursing home–putting lots of vulnerable populations at risk.”

Otten feels the future of energy is renewable energy and getting off of plastics. She says the technology is there to do it.

So, she decided to run for office. Winning wasn’t her main concern, getting the right word out was. She focused on her opponent’s big donors, which she says were people who were putting the pipeline in her back yard.

Otten felt that winning was a long shot, but she wanted to talk to voters about how the citizens could take their power back.

“It resonated,” she said. “Clearly. We knocked on over a hundred thousand doors. We talked to more voters than any other state House race in the entire Commonwealth and that work paid off.”