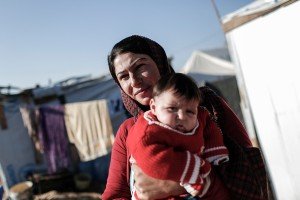 Shereen Sabah, 34, a mother of three, holds her 2 month old daughter Alaa outside the tent in which she now lives in an IDP camp outside Erbil, Iraq. Credit: Catholic Relief Services

During this year’s Corpus Christi procession, Pope Francis asked us to remember “our many brothers and sisters who do not have the freedom to express their faith in the Lord Jesus.” About 100 million Christians are persecuted each year around the world.

“Let us be united with them,” he said. “And, in our hearts, let us venerate those brothers and sisters who were asked to sacrifice their lives out of fidelity to Christ. May their blood, united to the Lord’s, be a pledge of peace and reconciliation for the whole world.”

Closer to home, the Pennsylvania House of Representatives also condemned the worldwide persecution of Christians and called on global leaders to protect the religious liberty of Christians and all other faiths within their borders.

Representative Kathy Rapp (R-Warren, Crawford, Forest), recalled Pennsylvania’s heritage while urging her colleagues to support her resolution: “Our Founder William Penn, himself, was imprisoned several times for his faith. He was a leading defender in his time of religious freedom.” House Resolution 182 passed unanimously on April 1, 2015.

From June 21 to July 4, 2015, American Catholics will mark the annual Fortnight for Freedom with a focus on the “freedom to bear witness” to the truth of the Gospel. These two weeks will include prayers, liturgical celebrations, and special events across the nation.

While we unite our prayers for persecuted fellow Christians around the world, we must not overlook threats to our own religious liberty at home. For example,

Religious freedom is a fundamental human right. “All men are to be immune from coercion on the part of individuals or of social groups and of any human power,” declared Dignitatis Humanae in 1965, “No one is to be forced to act in a manner contrary to his own beliefs, whether privately or publicly, whether alone or in association with others, within due limit.” This inviolable right is grounded in the human dignity from “the revealed word of God and by reason itself. This right of the human person to religious freedom is to be recognized in the constitutional law whereby society is governed and thus it is to become a civil right.”

The Pope and our state leaders are reminding us that we must be leading defenders of religious freedom now, in our time, and in every place where Christians are being persecuted across the globe or in our own public square.