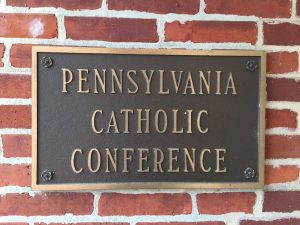 There will be a shift at the helm of the Pennsylvania Catholic Conference beginning June 1, 2018. Eric A. Failing, PCC’s current social concerns director, will assume the role upon the retirement of Robert J. O’Hara, Jr. after his 21 years as executive director.

Prior to joining the PCC staff as social concerns director, Failing was vice president of sales, marketing and development for Pennsylvania Legislative Services. In his year since joining the PCC team, he has spearheaded efforts to pass bills that would ban the practice of abortion for a Down syndrome diagnosis in the womb, expand services to the poor, address the crisis of drug addiction, and other issues.

When he announced his plans to retire in March, O’Hara told CatholicPhilly.com that he counts programs that benefit Catholic school families, namely expanding the Educational Improvement Tax Credit (EITC) and Opportunity Scholarship Tax Credit (OSTC), among his proudest accomplishments.  He has also worked tirelessly to promote social concerns, access to health care for the poor, pro-life issues and the ability of religious organizations to operate according to their beliefs without government interference.

The Pennsylvania Catholic Conference was established in 1960 to give witness to spiritual values in public affairs and to provide an agency for corporate Catholic service to the statewide community. It serves as the public affairs agency of Pennsylvania’s Catholic bishops and the Catholic dioceses of Pennsylvania. Its mission is to formulate positions on public policy issues, officially represent the Church before state government, and to foster a public understanding of the Church’s teaching and concern about morality, health, welfare, human rights, education and the common good.

The PCC gets involved with a wide variety of issues that span across the political spectrum. Visit www.pacatholic.org for the latest news and legislative updates, to lend your voice to advancing the Church’s position in the State Capitol through the PA Catholic Advocacy Network.

Congratulations, Eric Failing, on your new job, and Bob O’Hara upon your retirement. Godspeed to you both!