‘Every human being possesses inherent dignity, regardless of his or her immigration status’

Mark Shea, Esq., Administrator of the Immigration Program at Catholic Social Services in the Archdiocese of Philadelphia, testified before the House State Government Committee today regarding the impact “attrition through enforcement” has on immigrant families, particularly children. A number of legislative proposals are being considered in Pennsylvania that address immigration. 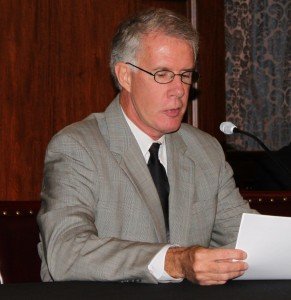 He impressed upon the committee to remember that “every human being possesses inherent dignity, regardless of his or her immigration status.” He cited studies and his own experience about the emotional and financial damage that occurs with family members left behind when their mother or father, wife or husband, is deported or detained. He says, “Children of undocumented immigrants suffer terribly as a result of the enforcement of our currently broken immigration laws.” He cautioned lawmakers to consider carefully the impact enforcement-only laws may have on families.

Shea also discussed the characterization of undocumented immigrants, “Undocumented immigrants in Pennsylvania are not responsible for any generalized ‘lawlessness’ in our communities…such unsubstantiated claims merely contribute to a poisonous rhetoric that stereotypes undocumented individuals as criminals. Simply residing in the United States without an immigration status is not a crime. It is a civil violation, but it is also something that the majority of undocumented individuals cannot do anything about, despite their fervent desire to legalize their status. Immigrants do not fail to become citizens because they are lazy or are inclined to criminality. Poverty, war, and desperation in their home countries drive them here. Then our federal government provides no way for the majority of them to attain a legal status.”

He cited an issue briefing from the United States Conference of Catholic Bishops (USCCB) explaining “Why Don’t They Come Here Legally?”

“We live in an imperfect and broken world, and when laws contradict the very heart of Christ’s message, we have a duty to advocate for change in those laws,” Shea concluded, “The family is the fundamental building block of society. We ask that protection of the family, charity toward all regardless of immigration status, and a factually-grounded concern for public safety drive this committee’s consideration of all measures.”