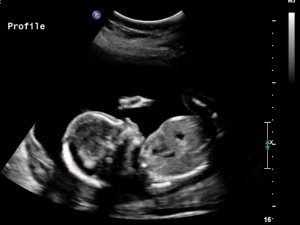 Ultrasound of a baby at 20 weeks.

Send a message to your legislator in support of this legislation at this link.

Over the past 30 years, massive changes in technology have literally transformed American society. But have ethical standards been able to keep up with scientific improvements? When it comes to pediatrics, that answer is an emphatic ‘no.’

At roughly the same time that the first connections of the Internet were being plotted, pioneers of fetal surgery (many of them at Pennsylvania’s own Children’s Hospital of Philadelphia) were dreaming of the possibilities of treating birth defects while the baby is still in the womb.

Now, nearly 30 years later, technological advancements have dramatically changed our everyday lives, and the radical notion of successful pre-birth surgeries is now a reality. Additionally, these same advances are giving increased hope to parents who are shocked when their babies are born far earlier than anticipated. These massive advances in science and medical technology require us to consider some profoundly important ethical questions.

It’s important to note that anesthesia is used in fetal surgeries for both mother and child. Why? Significant evidence now shows that by 20 weeks of development, unborn children have the capacity to feel pain.

We have the opportunity to protect the unborn children in this country whose lives are being ended – in many cases brutally – at an age at which these children are capable of experiencing pain. To that end, we have introduced legislation which would amend the Pennsylvania Abortion Control Act to reflect the scientific advances made over the last three decades.

Read the rest of the article at this link.

Send a message to your legislator here.