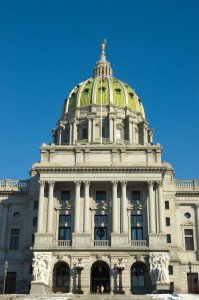 These are among top issues tracked by the Pennsylvania Catholic Conference (PCC) in the 2009-2010 legislative session. What happened and where do we go from here?

In March 2010, the U.S. Congress passed the Patient Protection and Affordable Care Act. Life-affirming health care for all has long been a concern of the United States Conference of Catholic Bishops (USCCB). Despite this consistent advocacy, the law was passed without adequate statutory restrictions on using federal tax dollars to pay for abortion coverage, fairness for legal immigrants or sufficient conscience protection for health care providers.

In the new session, it is likely that legislation will be introduced in Congress to address these concerns. The PCC will pursue legislation to restrict abortion coverage in the state’s implementation of the insurance exchanges.

New procedures for voluntary open adoption agreements were signed into law. It is easier now for a prospective adoptive parent to enter into a voluntary agreement with the birth relative of a child to permit continued contact if desired. Adoption professionals see this as a positive change that may encourage more women to consider adoption when faced with an unplanned pregnancy.

The Pennsylvania Marriage Protection Amendment was not successful during this term, but major cases addressing marriage in other states are working their way through the courts. There may be new opportunities to pursue the marriage amendment in the next legislative session, giving Pennsylvanians the chance to define marriage as the union of one man and one woman in the state constitution.

In 2009, the successful Educational Improvement Tax Credit (EITC) program was cut $15 million with a promise to cut another $10 million in 2010. Thousands of students lost their scholarships to Catholic schools.

But, thanks to the dedicated effort of the Advocates for Catholic Education and others, the scheduled cut in 2010 was prevented. Legislative leaders realized that further cuts would be problematic for many families across the state so they retained the $60 million for EITC.

The budget cuts in 2010 were averted, but predictions point to even greater economic challenges in the new legislative session. PCC and the Advocates for Catholic Education in Pennsylvania will need to keep up the effort to promote EITC.

Furthermore, many candidates in this election voiced support for school choice. Helping parents access the best education for their children will be another top priority.

The recent election dramatically changed the political landscape presenting new opportunities and new challenges. More than ever, concerned Catholics need to participate in the public debate. The PCC and the Pennsylvania Catholic Advocacy Network have a lot of work to do in the new year. We need everyone to get involved. Sign up for the network and learn more about the Catholic perspective on important political issues.