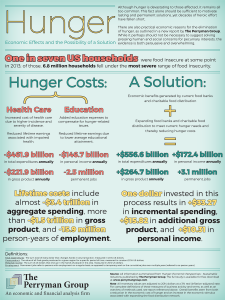 Eliminating hunger is good for the economy, according to a recent study.

The analysts of The Perryman Group studied the economic cost of hunger and found that: “In addition to enormous human costs, hunger imposes severe costs on the economy. Not having sufficient food leads to a number of problems, both individually and for society as a whole. Providing for basic food needs for all citizens is a worthy societal goal, and expanding and supporting food banks and the charitable distribution network they support can facilitate meeting this need.”

The Perryman Group estimates that “every $1.00 invested in expanding the food bank network to meet current needs will result in $33.27 in incremental spending, $15.82 in additional gross product, and $10.31 in personal income (including related multiplier effects).”

Organizations that work to meet the needs of the poor, armed with the research to back it up, are urging Governor Tom Wolf to build upon the good investments already made in Pennsylvania’s Food Security Partnership, the Pennsylvania Agricultural Surplus System, and the appointment of an adviser on food and nutrition programs. They are recommending funding of $21 Million for the State Food Purchase Program (SFPP) and $5 Million for Pennsylvania Agricultural Surplus System (PASS) in the 2016-2017 budget and asking that the programs be treated as separate and distinct appropriations.

In a letter signed by well over 400 organizations, including the Pennsylvania Catholic Conference, the organizations offer, “sincere thanks for the many positive steps you have taken to ease the pain of hunger which is still experienced by too many of our fellow Pennsylvanians … We believe that these relatively modest investments of Commonwealth resources will yield great benefits for Pennsylvanians struggling with hunger.”