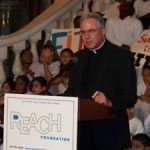 Children, businesses and community leaders united at the Capitol today to show their support for the Educational Improvement Tax Credit (EITC) Program, which provides companies with tax credit for donations to non-profit scholarship or educational improvement organizations.

According to initial budget reports, tax credit programs are looking at a cut of about $40 million in the 2009-2010 state budget. Preliminary estimates by the Department of Community and Economic Development’s Tax Credit Division show a record demand from the business community to claim tax credits under the EITC Program during the 2009-2010 fiscal year.

“If funding for the EITC is cut in the pending state budget, hundreds of businesses could be frozen out of the only Pennsylvania tax credit program that provides a direct benefit to children and families,” says Andrew T. LeFevre, executive director of the REACH Foundation. “But the real tragedy will be the thousands of students who will not be able to attend a school that meets their educational needs because they lose an EITC scholarship.”

Over 44,000 students were able to attend the school of their choice during the 2008-2009 school year because of the EITC Program, while a countless number of children in public school benefitted from innovative programs that would have likely gone unfunded. The EITC Program gives these students a chance for a successful future.

“The Governor may have made commitments to his friends in Hollywood, but we’ve made commitments to more than 44,000 kids in Pennsylvania,” says David Taylor, executive director of the Pennsylvania Manufacturers’ Association. “At a time when families are struggling through the worst recession in recent memory, it’s inconceivable that the Governor and General Assembly would turn their backs on Pennsylvania children in favor of Hollywood millionaires.”

In May 2001, Pennsylvania became the first state in the nation to pass an educational tax credit aimed at corporations. Our innovative EITC has been nationally praised as a model for offering parents a choice in their child’s education. Due to overwhelming demand and popularity, the EITC Program has been expanded four times since its enactment in 2001, with a current cap of $75 million.

“”Despite these tough economic times, Governor Rendell and the legislature are once again increasing educational spending for our public schools,” continued LeFevre. “The EITC program is first and foremost a program designed to improve educational opportunities for Pennsylvania’s children. Students who receive EITC scholarships should be considered as important as the students attending public schools.”

A video of the complete press conference is available from Roxbury News.