by Blue
HHS Mandate, Religious Liberty
Comments are off 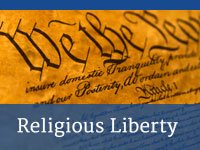 As reported in LifeNews.com, religious liberty won an initial victory this week. Massachusetts and several other states challenged the Trump administration last year after it provided relief from the Obamacare birth control mandate by granting wider exceptions to religious groups. The mandate forces employers to provide birth control, including forms that may cause abortions, in their employee health plans.

U.S. District Judge Nathaniel Gorton ruled against the Massachusetts lawsuit stating, “This court finds that plaintiff has failed to set forth specific facts demonstrating that it is likely to incur an injury caused by defendants’ conduct,” Gorton wrote. “Accordingly, the court declines, at this time, to address the merits of the Commonwealth’s statutory or constitutional claims.”

All Americans “should have the freedom to peacefully live and work consistently with their deeply held convictions without fear of government punishment,” he said.

“The HHS rules follow the Constitution, federal law, and legal precedents to protect freedom of religion and conscience,” he said. “Because the court determined that Massachusetts doesn’t have a sufficient legal basis for filing suit to challenge the rules, it refused to strike down rules protecting the freedom of pro-life organizations, like March for Life, and religious educational institutions, like Dordt College, to pursue their respective missions.”

Other court challenges are ongoing.