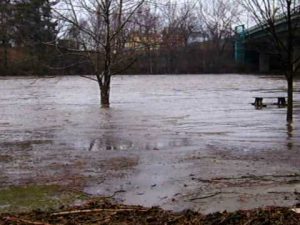 The Diocese of Greensburg, led by Catholic Charities, responded immediately to help individuals and families after a flash flood hit the Connellsville and Bullskin Township areas of Fayette County last summer.

Nine months later, the agency has concluded its efforts after providing $185,374 of assistance to 61 families in the form of new furnaces, water heaters and oil tanks and repairs to furnace and air conditioning systems.

“The church reaches out to help people in their time of need every day, and this particular effort shows that,” said Greensburg Bishop Edward C. Malesic. “I am proud of all the people of Connellsville, especially our parishioners, who have worked with no expectation of personal recognition to help their neighbors these many months. I am especially proud of the contributions by Catholic Charities. This is what it means to be Catholic.”

A torrential rainstorm dumped approximately 5 inches of rain in the area in just a few hours the night of Aug. 28, forcing several small creeks out of their banks and into surrounding neighborhoods, damaging 165 homes, according to reports in the Tribune-Review.

Donna Hagan, supervisor of information and referral services for Catholic Charities, made multiple trips to meetings of the Connellsville Flood Relief Fund Committee and VOAD, Voluntary Organizations Active in Disaster.

In November, Hagan said, “We will continue to help people until our last available dollar is distributed.”

That last dollar was distributed June 6.