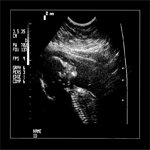 Controversy over a similar ultrasound bill in Virginia has renewed the debate in that state and in Pennsylvania over the Women’s Right to Know legislation. House Bill 1077 would give women the right to view an ultrasound of their babies before undergoing an abortion.

The Pennsylvania House of Representatives will take more time to review similar concerns about HB 1077. Although the bill passed the House Health Committee with a vote of 15-7, floor debate has been postponed.

The Pennsylvania Catholic Conference (PCC) maintains its support for the bill. We must not forget the crucial component of this debate – the women seeking abortion and their unborn babies. A decision as serious as abortion should be made with all of the available information. An ultrasound examination is already a standard practice in abortion clinics to determine gestational age or if the pregnancy is ectopic. Informing a woman that she has the right to view the ultrasound image and hear the heartbeat of her child, gives her access to the same information available to her doctor. It is her right to choose for herself whether to view it or hear it; and she can make her decision to abort or not based on informed consent.

Send a message to your state legislators encouraging them to continue the debate and to vote in favor the Women’s Right to Know Act.