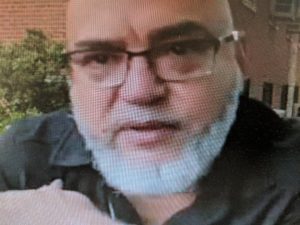 Deacon Jorge Vera has been Chaplain at SCI Camp Hill since February 2nd, of 2014. He remembers the exact date. It would be pretty easy therefore to get an exact count of how many days he’s put in on the job. But it would be a tough task to count the number of people he’s helped and souls that he’s touched.

“It’s a lot of work, but it’s fun,” Vera told me during a visit to the prison. “When you like to do what you do, it becomes part of you. It’s not like a job. Heck, I just recently found out I was getting paid for it!”

Vera is bilingual in English and Spanish and that comes in very handy with the church services and bible studies. He says the chapel services are packed. Vera estimates that there about 4,000 inmates at the prison and that at least 2,000 participate in the chapel services. It’s a pretty diverse ministry to say the least. They have Catholic mass on Saturday mornings from 8 to 9 or 9:30. On Sundays they have three Protestant services. On Fridays are the services for the Muslim community and for the Jewish community. Wednesdays are the services for the Native American community.  There are also Jehovah Witness’s services on Mondays.

“Everyone is entitled to a service, by law,” Vera says. But that is not all the inmates get. “I have Spanish bible studies. I have rosary classes for Catholics in Spanish and English, Vespers.”

They offer communion service on Wednesday mornings for inmates that can’t come to the weekend services because they work in the kitchen. Vera also goes to the cell blocks and hands out communion.

“The main thing is bringing people to God, making people feel good with what they do,” Vera said. “It’s really interesting how people can change their lives when you give them the opportunity to do so.

“When you come to an environment like this…and we’re eating at the same table, you see different religions, but we’re all related to one, true God.”

Vera says there is an important tool that he uses when dealing with inmates—kindness.

Vera says the prison has one of the best choirs around. He says the inmates put everything into their singing. It’s one of the many good things that Vera sees in his people.

“Because they’re broken down, a criminal, they’ve been labeled…that doesn’t mean that it’s over. It just means that they get another opportunity,” Vera said. And for many of the inmates, he is their first true taste of faith and spirituality.

“I always tell them that every sinner has a past and every saint has a future…when someone just comes out of the blue and tells you that God loves you. Just think about that, that says a lot.”

Of all the profound thoughts that Deacon Vera shared with me during our visit, the one that made the biggest impression on me was his belief that God is hanging out at the prison. Vera asks where else would He be? That’s where He is needed most.

“You hear that Gospel, it blows my mind, He would leave 99 for 1 (the story about the shepherd searching for the lost sheep). Wow. So that means if there are 99 of us in church and there is one out there lost, he would leave us in church…He would go for the one. This place is where that one is.”

Vera then told me one thing that seemed quite evident from listening to him.

“I just want you to know one thing…that this job is for me and that God called me to do this, because they come first and I come second. I really, truly have a passion for this job. I like it. I really enjoy it.”