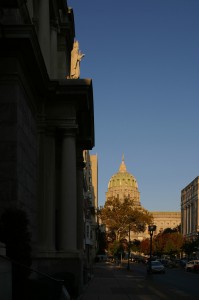 Constitutional law experts testified today that this bill – which is being pushed by labor unions – will jeopardize the constitutionally protected religious liberty of the Catholic Church and compromise its teaching mission in Catholic schools.

Attorney Mark E. Chopko, Esq., an expert in Church-State Law, believes the bill is constitutionally flawed. “The legislature is being asked to take sides in a religious dispute about authority and responsibility in Catholic schools,” he argued. “The legislation offends the free exercise of religion and establishment clauses of the United States Constitution.”

Chopko cited numerous court cases in the U.S. Supreme Court that affirm the right of churches to be free of government control, a right guaranteed under the First Amendment. In its 1979 opinion in NLRB v. Catholic Bishop of Chicago the U. S. Supreme Court said governmental oversight would inhibit the authority of the Bishop to administer the schools solely in keeping with the concerns of the Church and its teaching mission. The Church’s freedom to implement rules and to discipline teachers would be circumscribed by the power of government to look over the Bishop’s should in order to detect any anti-union motivation.

Dr. Robert J. O’Hara, Jr., Executive Director of the Pennsylvania Catholic Conference (PCC) also testified against the proposal. “The Catholic Church established its schools for the very purpose of passing on the Catholic faith to new generations of Catholics,” he said. “Our teaching mission is not the same as the Church’s works of charity. The teachers and staff at our Catholic schools are not merely providing a service; they are in effect ministers of the Gospel of Jesus Christ.

“Catholic schools do not segment their functions into religious and secular components. At all times, the Catholic school is engaged catechesis and the formation of the Christian personality, a process integrated within the curriculum and disciplines of the Catholic schools. Teachers in Catholic schools choose this honorable ministry and accept the responsibility to spread the Gospel by way of example both in word and in conduct.”

Dr. J. Brian Benestad, Professor of Theology at the University of Scranton, testified that “A bishop, without violating Catholic social doctrine, could reasonably decide that recognizing a particular union could be an obstacle to maintaining the Catholic identity, academic excellence or financial viability of the schools in his diocese.”

A full transcript of the hearing is available online.