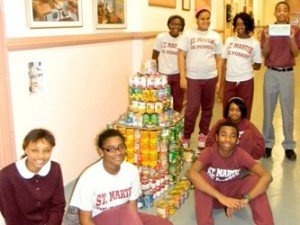 The Pennsylvania General Assembly marked the occasion by passing resolutions. Special thanks to the cosponsors and supporters. Here is the text of House Resolution 618 (Read Senate Resolution 286 here):

Designating the week of January 26 through February 1, 2014, as “Catholic Schools Week” in Pennsylvania.

WHEREAS, Catholic schools in this Commonwealth are celebrating Catholic Schools Week during the week beginning January 26, 2014; and

WHEREAS, The theme for this year is “Communities of Faith, Knowledge and Service”; and

WHEREAS, In the 2013-2014 school year, Catholic elementary and secondary schools educate approximately 153,000 students and save State and local taxpayers more than $2 billion; and

WHEREAS, Catholic schools instill in young people a strong foundation of values, self-esteem, self-confidence and leadership skills; and

WHEREAS, Catholic schools, in providing young people with a strong foundation of the values and academic skills needed in becoming responsible citizens of this Commonwealth and this nation, have a drop-out rate of less than 3% and a postgraduate higher education rate of 90%; therefore be it

RESOLVED, That the House of Representatives designate the week of January 26 through February 1, 2014, as “Catholic Schools Week” in Pennsylvania and express congratulations and appreciation to Catholic elementary and secondary schools across this Commonwealth on the occasion of Catholic Schools Week in 2014.