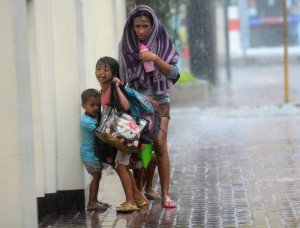 Super Typhoon Haiyan (local name Yolanda) arrived in the Philippines at 4:40 AM on Nov. 8 hitting Guiuan, Eastern Samar Island, with wind speeds of 195 mph, making it the strongest tropical cyclone on record to have made landfall anywhere in the world.

Thousands are thought to be dead with millions more suffering the consequence of destruction on par with that seen after the 2004 Indian Ocean tsunami. The needs are immense – shelter, food, water, sanitation, medicine.

“This is the worst storm ever to hit the Philippines,” said CRS’ Country Representative Joe Curry who noted that this country often suffers from extreme weather.

Curry says that there is total devastation in a 30 mile-wide swath cut by Haiyan as it passed over three heavily populated islands — Leyte, Panay, Cebu. That corridor includes 3.6 million people and about 10 million have been affected overall.

CRS staff began preparing a response as the storm neared and is working in coordination with Caritas Philippines, the Philippine government and other humanitarian organizations.

In the wake of the storm, CRS staff has flown in from around the world, some reaching the island of Leyte by boat.

CRS is distributing thousands of temporary A-frame shelters. Each can house a family of five. 32,000 of these shelters, ordered in advance of the storm, along with thousands of hygiene and sanitation kits are arriving in Cebu City, near the zone of destruction today.

The challenges include the destruction of infrastructure including electricity, communications and transportation. Anyone arriving to work in these areas must bring everything needed to survive – food, water, shelter, etc. Complicating the response is the fact that many relief supplies in the Philippines have already been dedicated to those suffering the effects of a recent earthquake in Bohol province.

CRS IN THE PHILIPPINES

CRS Philippines is the agency’s oldest continuously operating program. Prompted by the mass destruction and loss of life in the Philippines during World War II, Catholic Relief Services, then called War Relief Services, first launched relief efforts in that country in 1945. Just 1 year later, the agency was providing supplies to more than 800,000 people.

More recent work has focused on agriculture and peacebuilding programs on the island of Mindanao as well as disaster relief from the frequent typhoons and earthquakes.

As with the tsunami, CRS is committed to staying with the people of the Philippines affected by this horrific storm for as long as needed to bring not just relief, but also recovery.