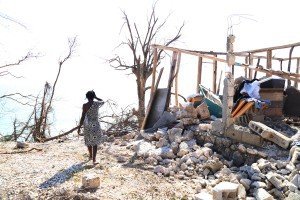 Mikai Edward 42, lost her home where she lives with her six children and husband in front of the ocean in the Zoranje neighborhood of Roche Bateau.

Catholic Relief Services (CRS) is committing an initial $5 million to help Haiti and other countries in the Caribbean recover from Hurricane Matthew, the powerful storm that has left hundreds dead and devastated communities in this nation still recovering from the earthquake that struck in 2010.

“Haiti in particular has once again been struck by a tragedy,” said Sean Callahan, CRS’ Chief Operating Officer. “This commitment shows that we will continue to stand with its people, offering our hand in friendship, to help and support them in this time of dire need.”

The funds will be used to continue and expand relief work that began even before Matthew hit on October 4 as CRS staff pre-positioned supplies in areas where the storm was expected to make landfall.

Based on the most critical needs, still being determined as teams are reaching areas cut off by the storm, CRS’ response will include:

CRS teams rode out the storm in towns like Les Cayes, Dame Marie and Jeremie on Haiti’s southwest peninsula that took the hardest hit. Once it passed, they immediately began assessing damage and distributing pre-positioned supplies to help residents recover from the 140-mph winds, storm surges and as much as 40 inches of rain.

“We have seen roofs blown off houses, damaged homes and waters flooding the streets, but we still don’t know the full scale of the damage. We will be doing all we can to reach the most affected areas as quickly as possible.” said Chris Bessey, CRS’ Country Representative in Haiti.

The $5 million represents an initial commitment to the recovery of Haiti, along with the Dominican Republic, Cuba and other countries affected. It will be augmented by more funds, from both public and private sources. Rebuilding destroyed homes and restoring lost agricultural fields is expected to take years.

High population density, severe deforestation and decaying infrastructure make Haiti, the poorest country in the western hemisphere, particularly vulnerable to the effects of natural disasters such as hurricanes, earthquakes and floods.

It was a hurricane that first brought CRS to Haiti in 1954 when Hazel left widespread damage and over 1,000 dead. The agency has been at work in the country ever since.