Call on Congress to Support Refugees from Iraq and Syria 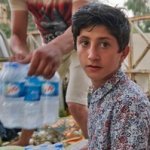 The humanitarian crisis facing families in Iraq is something that was unimaginable for many of them just months ago. Since January of this year, 1.2 million Iraqis have been displaced from their homes. Christians, Yazidis, and mainstream Muslims have been slaughtered and many more have fled their homes in fear of the extremist group, the “Islamic State” (also known as ISIS), that has committed heinous atrocities in the region.

Many of the displaced left in the middle of the night at a moment’s notice, crowded into small cars with large numbers of family members, fleeing for safer cities like Erbil and Dohuk. They found refuge only after being robbed at check points and walking for hours or days. The life they once knew is gone, replaced by uncertainty.

The response to the immediate needs of these refugees has been swift and strong. The U.S. government is providing robust assistance so that Catholic Relief Services, working with the local Catholic Church, alongside other groups can supply families with food, water, shelter, cooking utensils, blankets and other things essential for daily life.

There does not appear to be an end in sight to the violence in Iraq.  ISIS forces cross in and out of neighboring Syria, a country embroiled in its own brutal 3-year-old civil war. Iraqi and Syrian refugees fear what the future holds. Children are especially hard hit.  For starters: while school in Iraq is supposed to be in full swing, tens of thousands of refugees are living in school classrooms. It’s unclear when schools will reopen and, if so, where the families living there will go.

Past crises have taught us that refugees desperately need help when they first arrive. But just as important is helping them create a new future for themselves and their families with education, jobs, permanent housing, and access to health care.  That is why Catholic Relief Services and the United States Conference of Catholic Bishops are advocating in support of U.S. leadership to address the immediate needs of refugees, building long-term solutions for displaced people and lasting peace in the region.

CLICK HERE TO EASILY SEND A MESSAGE TO YOUR LEGISLATOR.

Urge your Senators and Representative to: