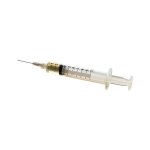 Commenting on the April 29 bungled execution of a death row inmate at the state penitentiary, Oklahoma City’s archbishop has called for a reconsideration of capital punishment.

“We certainly need to administer justice with due consideration for the victims of crime, but we must find a way of doing so that does not contribute to the culture of death, which threatens to completely erode our sense of the innate dignity of the human person and of the sanctity of human life from conception to natural death,” Archbishop Paul Coakley said April 30.

Inmate Clayton Lockett was administered a sedative at 6:23 p.m., according to the BBC. Ten minutes later, he was said to be unconscious and was given lethal injection, but soon began to writhe and breathe heavily.

Cary Aspinwall, a journalist with the Tulsa World, was covering the execution, and tweeted that at 6:37, “Lockett was not unconscious and said something is wrong,” and that two minutes later, he was lifting his head and that officials “closed curtain and stopped it.”

It was announced that Lockett did not die until 7:06, of a massive heart attack.