If you’re like me when you think of Catholic Schools, you think of discipline. It’s one of the main reasons that I enrolled both of my children in Catholic school. But ‘discipline’ can take many forms, and it doesn’t have to be punishment. ‘Discipline’ can also mean ‘guidelines.’

Such is the case at many Catholic schools, including St. Mary Magdalen School, outside of Media, Delaware County.

“We call it discipline,” said Principal Denise Winterberger. “But I think it’s just a philosophy of how we exist and that is with a respect for others.”

Winterberger says that discipline begins every morning in the gym. They start with prayer and the pledge to the flag.  And then they do the school pledge.

“The kids go through six rules that they follow and keep in mind every single day,” Winterberger explained.

It must be working. 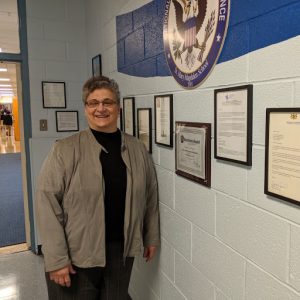 St. Mary Magdalen was honored last October as a Blue Ribbon School of Excellence by the U.S. Department of Education.

“We have to focus on what makes our school unique,” she said. “We have a program called ‘Disciples of Jesus.’ Every student works toward getting recognized each month with different virtues and characteristics of being a good moral child or student.”

She says their enrollment is holding steady around 350 to 355. They got five more students since they were named as Blue Ribbon winners.

Winterberger says the parents are very supportive and so is Monsignor Ralph Chieffo.

“Msgr. Chieffo is our pastor and is top notch compared to all the pastors I’ve worked for,” Winterberger said. “He supports us financially as well as emotionally and with his presence, making sure that whatever we need, we get.”