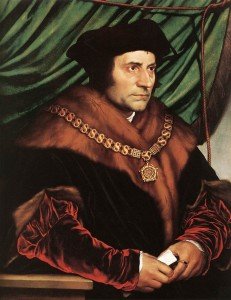 A joint statement of the Pennsylvania Catholic Bishops on the Tenth Anniversary of the Apostolic Letter (Motu Proprio) of Pope John Paul II proclaiming St. Thomas More as the patron of statesmen, politicians and lawyers. October 31, 2010

Today we celebrate the tenth anniversary of the Apostolic Letter (Motu Proprio) of Pope John Paul II proclaiming Saint Thomas More as the patron of statesmen, politicians and lawyers. Together with the people of the Commonwealth of Pennsylvania, we call to mind the significance of this great saint of the 16th Century for us today.

St. Thomas More lived—and gave his life—for truth. He provides a powerful example that not only shows that objective truth exists, but that we have the God-given ability to discern it. He stands as an example showing all statesmen, politicians and lawyers—and indeed all of us—that we have an obligation to find and to serve the truth and to work to protect the lives and fundamental dignity of all human beings.

In 1929, the great Catholic writer, G.K. Chesterton, wrote that: “Thomas More is more important at this moment than at any moment since his death, even perhaps the great moment of his dying. But he is not quite so important as he will be in about a hundred years’ time.”

Chesterton’s assertion of St. Thomas More’s importance to our times was soon vindicated. Six years later, in 1935 Pope Pius XI canonized More and proclaimed him to be the patron saint of lawyers. We celebrated the 75th anniversary of St. Thomas’ canonization on May 19th of this year. The canonization of St. Thomas More, of course, did not occur in a vacuum. The 1930’s were a decade in which totalitarianism was on the march with Nazis, Communists and Fascists all arguing that people owed their highest loyalty to the state and its beliefs. Pope Pius XI was an outspoken foe of totalitarian ideologies, which he recognized as being wholly incompatible with Gospel values.

In canonizing St. Thomas More and proclaiming him to be the patron saint of lawyers, Pope Pius XI rejected the totalitarian concept of society and emphasized the importance of law and lawyers in ensuring that governments worked for people and did not seek to crush them. More had been executed because he had refused to place the demands of the state before the requirements of his conscience and had insisted that there were objective truths that governments could not legitimately seek to override. In the very dark decade of the 1930’s, St. Thomas More provided a powerful beacon of hope and inspiration. He was a light in the darkness precisely because he had devoted his life to, and sacrificed it for, Christ, the true light in the darkness.

In 1966, thirty-one years after St. Thomas More was canonized, the motion picture, A Man for All Seasons, which was based upon the play by Robert Bolt, won six academy awards, including best picture, thus placing St. Thomas More’s heroic virtue in the public consciousness and conscience. The movie focused upon the conflict between conscience and institutional loyalty and its resonance with the public showed how that conflict was becoming a significant issue in our world. By his example, St. Thomas showed that even the most powerful and determined governments cannot eliminate the command of our consciences.

On October 31, 2000, Pope John Paul II issued an Apostolic Letter in which he proclaimed Saint Thomas More to be the patron of statesmen, politicians and lawyers. In that letter, the Pope proclaimed:

“The life and martyrdom of Saint Thomas More have been the source of a message which spans the centuries and which speaks to people everywhere of the inalienable dignity of the human conscience, which, as the Second Vatican Council reminds us, is ‘the most intimate centre and sanctuary of a person, in which he or she is alone with God, whose voice echoes within them.’ (Gaudium et Spes, 16).

Whenever men or women heed the call of truth, their conscience then guides their actions reliably towards good. Precisely because of the witness which he bore, even at the price of his life, to the primacy of truth over power, Saint Thomas More is venerated as an imperishable example of moral integrity.” (emphasis added)

It is now 2010. We are now in the age of Chesterton’s prophecy and there can be little question that Chesterton has been proven correct. As Pope John Paul II recognized, we live in an age in which our world needs examples of moral integrity, an age in which our consciences should stand for objective truth and not bend and shift to fit the changing fashions of the day.

Our Holy Father, Pope Benedict XVI, has been thinking and writing on these issues for decades. Much of the profound moral discourse in his recent encyclical, Charity in Truth, finds expression in the life of St. Thomas More. Pope Benedict writes: “To defend the truth, to articulate it with humility and conviction, and to bear witness to it in life, are therefore exacting and indispensable forms of charity . . . . Truth preserves and expresses charity’s power to liberate in the ever-changing events of history.”

St. Thomas More was an enormously successful lawyer, diplomat, statesman and writer on the European stage of the sixteenth century. But with all his accomplishments and success in the world, he always realized the primacy of his vocation as a holy husband and a holy father – all the while, keeping his eyes on Heaven and Eternal Life.

In celebration of the recent 75th anniversary of St. Thomas More’s canonization and the tenth anniversary of Pope John Paul II’s Apostolic Letter, we the bishops of Pennsylvania propose St Thomas More as a model for all citizens of the Commonwealth because of his outstanding virtues and his refusal to bend his conscience no matter what inducements were offered or threats were made. St. Thomas More’s moral integrity truly made him a man for all seasons, and most especially for Americans in the 21st century.

To that end, we will support and encourage the strengthening of St. Thomas More Societies in those dioceses in which they already operate and their creation in those in which they do not. These societies are organizations for judges and lawyers that support bringing the light of St. Thomas More to the profession of law. They have proven to be effective instruments for the ongoing spiritual, intellectual and legal formation of contemporary lawyers and judges, and they include not only Catholics but members of other faiths who share our admiration for St. Thomas More. To help them promote the common good in the name of their great patron, as bishops we will continue to work together to establish and expand communication and common efforts among the St. Thomas More Societies in Pennsylvania.

The Catholic Bishops of Pennsylvania