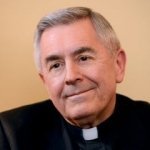 Bishop Gainer at his office in Harrisburg. Photo by Jeff Ruppenthal, Lancaster Online

The Lancaster County countryside tells a remarkable story of religious liberty. The landscape is still dotted with evidence of the brave men and women who risked everything to escape religious persecution. Conrad Beissel’s Cloister in Ephrata; the still thriving Amish community; historic churches home to today’s congregations of Quakers, Mennonites, the United Church of Christ, Methodists, and Presbyterians; a Jewish synagogue; St. Mary’s Catholic parish that was established by courageous Jesuit priests in 1741; and the newer Islamic center and Buddhist temple are all landmarks of religious liberty.

These believers fled their homelands seeking the freedom to practice their faith publicly and privately without government interference. We celebrate the struggles of our determined forefathers who fought to enshrine religious liberty into our Bill of Rights. We hold them up as heroes and heroines.

In a free and diverse society, we respect the freedom to live out our convictions. Yet today, alarmingly, men and women who stand up for their right to practice their faith in public are derided as intolerant, bigoted and oppressive. Increasingly, government policies are being implemented that penalize people with religious convictions by forcing them to comply with something that violates their moral conscience or, if they refuse to do so, face stiff fines.

The U.S. Department of Health and Human Services, under authority provided in the Affordable Care Act, is mandating coverage of sterilization, contraception and abortion-causing drugs in all employer health insurance plans. Religious ministries of service — such as charities, schools, health care facilities and institutions of higher education — are given, at best, second-class status under the law in the form of a still-murky “accommodation.’’ Many religious entities, including Catholic dioceses, are challenging this mandate in federal courts across the country.