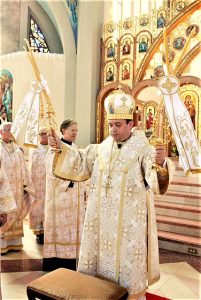 A special celebration, called a Hierarchical Divine Liturgy, was held for newly-ordained Bishop Andriy Rabiy to formally welcome him as auxiliary bishop for the Ukrainian Catholic Church, Archeparchy of Philadelphia.

The liturgy was held on Sunday, September 23, 2017, at the Ukrainian Catholic Cathedral of the Immaculate Conception in Philadelphia.

A native of Lviv, Ukraine, Bishop Rabiy was appointed by Pope Francis as auxiliary bishop for the Archeparchy of Philadelphia on August 8, 2017. He was ordained to the episcopacy on Sunday, September 3, 2017, in St. George Ukrainian Catholic Cathedral, Lviv, Ukraine.  The consecrating bishops were:  Major Archbishop Sviatoslav, Metropolitan Stefan Soroka, Archbishop of the Ukrainian Catholic Archeparchy of Philadelphia and Bishop David Motiuk, bishop of the Eparchy of Edmonton, Canada.

In addition to expressing his sincere gratitude to Archbishop Stefan Soroka and all of the clergy in attendance, Rabiy said, “I want to thank the many faithful who came to the Cathedral today to share the day of joy and God’s grace in our Archeparchy. My prayers go out for you and I thank you! May the good Lord bless you always!”

The Pennsylvania Catholic Conference sincerely thanks Bishop Rabiy for his service to the conference as a member of its Administrative Board.