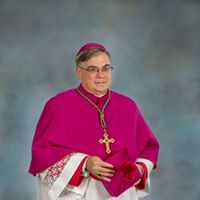 “Be who God meant you to be and you will set the world on fire!” – St. Catharine of Siena

On August 31, at a special mass held at the Cathedral of Saint Catharine of Siena, Bishop Alfred A. Schlert was ordained and installed as the Fifth Bishop of Allentown.

He is the first priest ordained for the Diocese of Allentown to become Bishop of the Diocese.

A native of Easton, Bishop Schlert was born to Alfred and Marylou Schlert on July 24, 1961, just six months after the Diocese of Allentown was formed. He was educated at St. Jane Frances de Chantal Elementary School and Notre Dame High School, both in Easton. He prepared for the priesthood at St. Charles Borromeo Seminary near Philadelphia and the Pontifical Roman Seminary and St. John Lateran University in Rome and has been a priest of the Diocese of Allentown since his ordination in 1987.

During his homily, the archbishop cited the recent celebration of the feast of St. Augustine of Hippo, citing him as one of the greatest bishops in Christian history because he lived first and foremost as a father, moved by a father’s love.

“That’s the vocation of a bishop in the Catholic Church. That’s the mandate of every man called to be a successor of the Apostles,” said Chaput.

The Pennsylvania Catholic Conference sincerely thanks Bishop Schlert for his service to the conference as vice president and member of its Administrative Board. May God hold you in the palm of his hand.