Around the Commonwealth: School Choice in Pennsylvania

Governor Corbett has introduced school choice as his top priority for the fall. Yesterday, Senate Bill 1 passed the Senate and is now headed to the House of Representatives for passage.  Send a message to your representative in support of school choice today! In light of this fast-paced progress, let’s take a look at school choice efforts across the state.

As a group, the Bishops of Pennsylvania issued a statement in support of school choice last month. And of course, each local community has been busy promoting school choice – the creation of a voucher program and an increase to EITC scholarship – in their own neighborhoods. Here are some of the results: 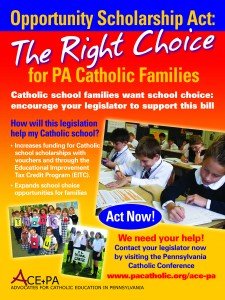 The Diocese of Allentown has produced and distributed these posters to every Catholic school and sent home flyers of the same design to every family. The posters proclaim that school choice is “the right choice for PA Catholic families.”
Diocese of Altoona-Johnstown

In a recent edition of The Catholic Register, Bishop Mark Bartchak wrote “Growing up in a family of eight children, my brothers, sisters and I received many invaluable gifts from our parents. One of the most important gifts was a Catholic education. It was a gift that came about through much sacrifice on their part, but one they were willing to make. My parents knew that a Catholic education was an investment that would pay dividends for life. How right they were! I am grateful to my mom and dad for many things, especially the opportunity to be educated in an environment where I could grow spiritually, emotionally, and intellectually. I don’t think it was a coincidence that I discovered my vocation to be a priest while attending a Catholic high school.

Times have changed since the days when my siblings and I hopped on a school bus. These days, more and more parents are finding that their willingness to sacrifice for their children’s education is no longer enough. No matter how hard they try, a non-public education for their kids is financially out of their reach. As a result, students sometimes are forced to be educated in an environment that is just not the right fit. No child should be in that situation.” Read his whole message on pg. 5 of this edition of The Catholic Register.

The Diocese of Erie hosted a press conference in Dubois to share the news of school choice with their community.  During the conference, Erin Landini-Grogan of the Diocese of Erie said, school choice is “critical for students throughout the Commonwealth. There are children who live in rural areas and in urban areas who would benefit from the ability and their parents’ ability to choose where they attend school.”

The Diocese of Erie has been speaking about school choice at every turn, including at meetings with pastors, principals and school administrators.

Trent Bocan, Superintendent of Schools, provided this video to parents and members of the community. He says school choice, “has the potential to impact the lives of tens of thousands of families who want to education their children in a safe and successful education setting rooted in faith…School choice programs have been extremely successful in many states, allowing thousands of families to make the choice to education their children in Catholic schools, while receiving tuition assistance to do so.” Watch the entire video and read Bishop Brandt’s letter to parishioners here.

Bishop Joseph McFadden took part in a back-to-school video conference with students from around the Diocese of Harrisburg. In this video, you can hear the student’s question about school choice and listen to Bishop McFadden’s response.

In the Archdiocese of Philadelphia, Archbishop Charles Chaput said the following in a press release, “The debate over school vouchers and an increase in EITC funding is a pivotal moment for education in Pennsylvania. School choice is about more than education; it’s also about opportunity, justice and parental rights. Its goal is always the same-to empower parents to educate their children as they judge best, and to provide poor families with alternatives and real opportunities to succeed.” Read the entire release here.

Ronald T. Bowes, assistant superintendent for policy and development for the schools of the Catholic Diocese of Pittsburgh, wrote in the Pittsburgh Post-Gazette,

“I am not arguing that school choice is the answer to all our problems in education, but some things we know. Parents want and need choice. It empowers them, forces them to become more involved in their children’s education and gives them a sense of ownership.

School choice places children first in the educational process. It instills competition and accountability. School choice releases the creative talents of teachers and administrators. It creates the environment and generates the energy for other reforms to take root.

After decades of waiting for competition, accountability and choice, let’s allow this commonsense approach — the same approach we use in higher education with great success — to transform primary and secondary education in Pennsylvania.”  Read the whole article here. 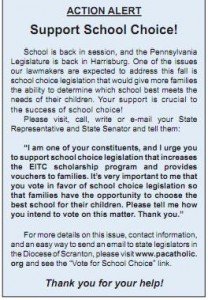 Bishop Bambera said in a recent Scranton Times-Tribune article, “exploring ways to give parents the ability to make the best decisions for the education of their children is a worthy goal.”

Further, the Diocese of Scranton is utilizing its online parent communication system to keep families abreast of latest school choice news as well as facilitating communications to legislative offices. Action alerts are regularly printed both the diocesan newspaper and the diocesan email newsletter.