by Blue
HHS, Religious Liberty, school choice
Comments are off 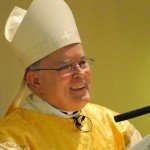 Archbishop Charles Chaput writes about religious freedom in his most recent column:

“On Thursday, April 12, America’s bishops issued one of their most important statements in years. Our First, Most Cherished Liberty is not just a compelling defense of religious freedom. It’s also a call to action no committed Catholic can afford to ignore.

First, a little history and some background:

In the vision of America’s Founders, God exists, and his sovereignty matters. God endows each person with freedom and rights so that we can fulfill our duties toward him and each other. Our rights come from God, not from the state. Government is justified only insofar as it secures, promotes and defends those natural rights.

As James Madison said in his 1785 “Memorial and Remonstrance against Religious Assessments”:

This is why religious liberty is our most important freedom. Our first governor is God, our Creator, the Governor of the universe. We’re created for a higher purpose. We have a religious destiny. Our right to pursue this destiny precedes the state. Any attempt to suppress our right to worship, preach, teach, practice, organize and peacefully engage society because of our belief in God is an attack not only on the cornerstone of human dignity, but also on the nature of the American experiment.”