Advocates, Lawmakers Stand up for “Safe Harbor” at State Capitol 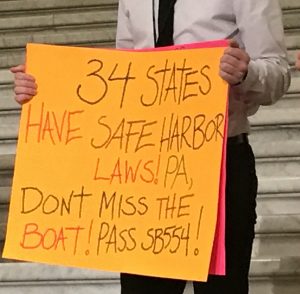 The Pennsylvania Catholic Conference is a strong supporter of the proposed “Safe Harbor” bill.

“Human trafficking is a crime against humanity. We must unite our efforts to free victims and stop this crime that’s become ever more aggressive, that threatens not just individuals, but the foundational values of society.” – Pope Francis

Standing united on the steps of the state’s Capitol, advocates and lawmakers renewed the call to stand up for the dignity of young lives being destroyed by human trafficking.

Specifically, they urged House passage of legislation, introduced by Sen. Stewart Greenleaf (R-Montgomery/Bucks), which would provide specialized services to victims of sex trafficking under the age of 18 instead of facing charges in the juvenile justice system. The bill would establish a statewide protocol to provide local services including safe and stable housing, access to education, employment and life-skills training, counseling, treatment for addictions, health care, and more. Rather than facing delinquency charges for prostitution, these children will get the help and support necessary to break free from enslavement.

State Rep. Joanna McClinton, who served as assistant public defender for seven years, led the call for action to protect the real victims of human trafficking saying,” There are children in Pennsylvania that get prosecuted. It’s crazy that they get prosecuted when they are the most vulnerable children.

“If these children are protected they can help us really be able to find out who are the traffickers, where they are. They can point us and lead us in the right direction while getting the support they so desperately need.”

Senate Bill 554 was unanimously passed by the state Senate on April 25, 2017. It is currently under review by the House Judiciary Committee.

Urge your local lawmaker to support a better life for sex trafficking victims by voting YES on SB 554.