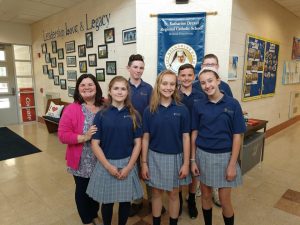 The excitement level was very high the day we visited St. Katharine Drexel Catholic School in Southampton, Bucks County. It was the last couple of days before Christmas break. Parents and kids were moving about the school. Manger scenes that the children had created were sitting on a table in the hallway. Decorations were hanging from the walls and ceilings. It was just a great atmosphere.

There were some other decorations that were hanging in various locations that had also added to the air of excitement about the school. Those were signs that identified St. Katharine Drexel as a 2018 Blue Ribbon School of Excellence. The program honors public and private schools that have placed in the top 10 percent on state or national assessments. It also takes into account a school’s leadership, curriculum, student achievement, parent involvement and community support.

“Part of our mission is to create Catholic leaders through personal development, Christian service and also through academic excellence,” said school Principal Laura Clark, who is in her fifth year in that position.

Like many private schools in the Philly suburbs, S.K.D. has a tough challenge. Its students come from one of the premier public school systems around—the Council Rock School District.

“It really makes us cutting edge,” Clark said. “We’re just as good as the public schools, if not better. We also have that second piece of Catholic faith that we are bringing to our students each and every day.”

The school has been celebrating the Blue Ribbon designation in different ways, including asking their students to do more public service. The kids are being asked to do that service on their own time—in addition to what they are doing through school. It’s a stark change for many of us “old-timers” who remember our version of public service as a student was deciding not to through our used candy wrapper out the car window. These kids hit the food banks and soup kitchens in their spare time.

“Our school is such a wonderful school,” said Clark. “We are truly a family. It’s evident in everything we do, but this big title and distinction and us all coming together…it just hit home of how much we are a family. And a Blue Ribbon School of Excellence.”