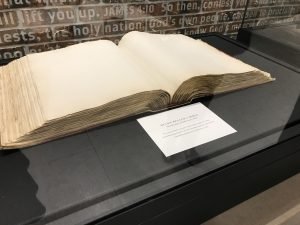 Would you like to see the first Catholic Bible printed in America?

Its history traces back to its publisher, an Irish refugee, who advertised that he would print the Bible if he found 400 subscribers. He acquired 471, allowing him to print.

Today, this Bible is one of the rarest books in America and can be seen in the future Faith & Liberty Discovery Center located in Philadelphia.

The American Bible Society, who celebrated its 200th anniversary in 2016, is planning to launch the center on historic Independence Mall, placing the Bible alongside America’s key founding documents: the Constitution and the Declaration of Independence.

Staff from the Pennsylvania Catholic Conference recently visited the Philadelphia site which is slated to become home to the Faith & Liberty Center at the invitation of state Rep. Rick Saccone, R-Washington/Allegheny.

In addition to the Catholic Bible, curious visitors of the future site can view Hellen Keller’s Bible, a Bible that was placed in lifeboats and rafts during World War II and leaves from the first book ever printed: Gutenberg’s Latin Bible. 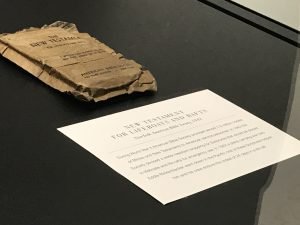 “The American Bible Society is creating new ways to reintroduce the amazing restorative power of God’s word to our culture. We need to support this organization and its mission. I will do everything in my power to help,” said Saccone.

The goal of this unprecedented facility is to create a museum which is immersive and discoverable – a one-of-a-kind experience for visitors. The Faith & Liberty Discovery Center is projected to open in 2019 and estimated to draw 408,000 visitors within the first year.

More information on the planning of the Faith & Liberty Discovery Center can be found here.