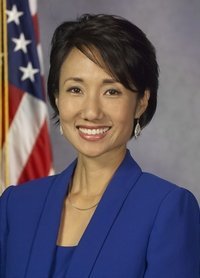 “We meet with constituents all summer,” said Rep. Patty Kim (D-Dauphin), who hosted me in her Kline Village district office in Harrisburg. “It’s a good time, now that we’re out of the Capitol, to meet with people, hear their issues—ranging from ‘I need an apartment can you help me?’ to ‘I have issues with my driver’s license, I need a new I-D.’”

The Pennsylvania Catholic Conference works with legislators from both parties and Kim is no exception. The PCC is working with her on some criminal justice issues. Those issues have become bi-partisan in recent months.

“When I first started, I didn’t know anybody who went to prison,” Kim said. “After hearing a lot of stories about the process, how people get in and then they come out, it’s very restrictive. And I don’t think it’s very fair.”

Kim shares the perspective of many lawmakers that the ‘system’ does not give offenders a second chance. It leaves them branded and makes it difficult for them to get a job and turn their lives around.

“People make mistakes,” she said. “They go to prison for it. They pay their dues. They pay their fines. And then they come out and it feels like the handcuffs are still on because there are so many obstacles and barriers. The laws that we’ve passed help seal their records so employers can’t see them but law enforcement still can. It’s helped a lot of people.”

She points out that many people commit crimes to feed drug addictions. But she says many people become healed and basically have a new life.

“Opioid addiction is terrible and people have suffered from it. We’re trying to heal them and at the same time change their lives around so that they can get back on track. If we look at people through the eyes of compassion, see them as humans, get them healed, give them resources, we could have such a better and healthier society. They’ll pay their taxes. We won’t have to imprison them for $50,000 a year. That’s ridiculous. They could be out living a life with their families that you and I want.”

Kim was a big proponent this past session for raising the minimum wage. It was the Governor’s pet project as well. But no increase was passed.

“It’s so disappointing that we couldn’t get an agreement on a number,” she said. “I think the majority of us in the House want to see a higher minimum wage, but we can’t decide on the exact number.  I am hopeful that we will restart the conversation and get something—we were asking for $15 by 2023. The Republicans haven’t come back with a number but I’m hoping we can get a compromise.”

Kim is also working with colleagues on both sides of the aisle to take a look at the public school code.  She says there are a lot of old mandates in the code which restrict school districts from doing well. She also pointed out the issues the Harrisburg School District is having. They are entering receivership again.

“I’m going to be working closely with the receiver so that we can get things back in order. I’m excited this could be maybe out last hurdle before we get things going well.”

And Rep. Kim had some kind words to say about the Catholic schools in her district.

“I want to thank the Catholic schools in the district for doing such a great job in educating kids. There are kids who don’t want to go to the public schools and the alternative is the Catholic schools. Their curriculum is solid and I am very appreciative of them caring for some of my students. I know they are a very valuable resource.