2013 Civic Commemoration of the Holocaust 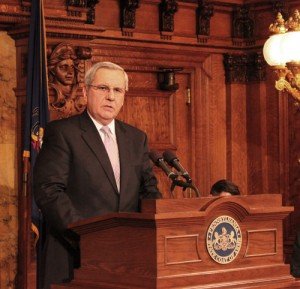 On Monday, April 8, the Pennsylvania Jewish Coalition hosted the 2013 Civic Commemoration of the Holocaust.

Holocaust survivors were introduced to the standing room only crowd in the Governor’s Reception Room, and each present lit a candle in remembrance of the Holocaust. Students from Silver Academy in Harrisburg read excerpts from their essays, “Lessons Learned from the Holocaust.”

Francis Viglietta, Director of Social Concerns for the PA Catholic Conference, offered the interfaith message. He said, “It is an honor to participate in this solemn commemoration… Because the lessons learned from the atrocities committed by the Nazi regime against the Jewish people seven decades ago are lessons for people of all faiths. They must never be forgotten. In fact, it is our sacred duty before God to remember always.”

Mr. Viglietta (pictured above) also quoted from “We Remember: A Reflection on the Shoah,” a document published by the Catholic Commission for Religious Relations with the Jews. It can be read here. Upon its release, Pope John Paul II said, “May the Lord of history guide the efforts of Catholics and Jews and all men and women of good will as they work together for a world of true respect for the life of every human being, for all have been created in the image and likeness of God.”

The event closed with the singing of “Zog Nit Keynmol,” a Yiddish song inspired by the Warsaw ghetto uprising.