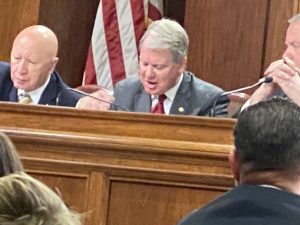 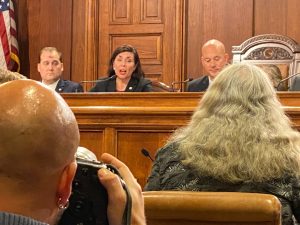 The PA Catholic Conference has been keeping its eye on the budget hearings in Harrisburg, which have been going on for a couple of weeks now. The different departments in the Wolf Administration are going before the House and Senate Appropriations Committees to explain– and many times to defend—what the Governor has called for.

The PCC and many pro-life lawmakers and advocates have been concerned about a line in the budget that calls for $3-million in funding for reproductive health care. The fear was that it would go toward Planned Parenthood and therefore toward abortion.

That turned out to be correct.

The Secretary of the Department of Human Services, Theresa Miller, defended her request and conceded that it was to replace federal funding that Planned Parenthood had lost. Miller insisted that the $3-million would not be used for abortions. It would be used for other services, like STD testing, contraception, cancer screenings and primary healthcare.

“I’m very happy to hear you say on the record that the $3-million will not go toward abortion services,” Sen. Phillips-Hill said. “On the belief that it would provide tax-payer funded abortions.

“How do you differentiate between the types of services that Planned Parenthood provides,” she continued. “How do you tell them what they can and can not use the $3-million for? Are there any restrictions on how that money can be used?”

Miller said Planned Parenthood offices have to certify that they separate abortion services from all other family planning services.

“Why in the world are we going to subsidize an organization whose number one goal is the murder of unborn babies?” he said. “That’s what they do. All the other stuff—the screenings, the birth control items—that’s such a minor part of what they do. They make money off of abortions. ..Planned Parenthood promises not to use that $3-million for abortions. I got a bridge to sell you in Brooklyn if you believe that.”

Meanwhile on Thursday it was Secretary of  Education  Pedro Rivera who fielded a number of tough questions and complaints about the budget.  There was a lot of criticism from several Senators over cuts to school safety. They PCC is also very much against those cuts.

Sen. David Argall (R-Berks, Schuylkill) did not mince words in expressing his dissatisfaction. He referred to the proposed cuts as “kuhscheisse,” the Pennsylvania Dutch word for bull excrement.

“There have been far too many tragedies in our schools across the United States in the past few years,” Argall said. “We worked in a bipartisan fashion to find the funding to protect our school children just two years ago. To propose these dangerous cuts is legislative malpractice…I would recommend the staffer who proposed these cuts be fired.”

Sen. Vincent Hughes (D-Montgomery, Philadelphia) meanwhile said he strongly backs the Governor’s budgeting $1-billion to address environmental and structural problems in schools. Hughes has been very aggressive in detailing the structural deficiencies in many schools across the state and calling for state money to help fix the issues.

PCC Calls For Adherence to Moratorium on Evictions and Foreclosures